Positive leadership gets real at 13,000 feet above sea level.

Two years ago I climbed the Grand Teton in Teton National Park with my husband and our friend. This was my first mountaineering adventure, and I was nervous.

But I couldn’t let my brain go there. Negative thinking was not an option.

I heard my husband talk about a section of the climb that was incredibly exposed with a sheer drop-off to thousands of feet below. I knew I couldn’t think about it or I would psyche myself out. My motto became “just keep moving.”

Success Starts With a Conversation

The mountain was crowded that day with some teams that were expert and courteous, but there were a couple of teams that disregarded all mountain code. It was sort of a junk show, and they put more than just their own team members in danger.

But I was confident in my team and their skill set, and I made sure that my communication with them was clear and positive. We had a goal, and we were going to get there--despite what others around us were doing.

Don't get me wrong. I didn't sugar-coat things either. If I needed a rest, or had to talk through a difficult section I made sure that my team knew what I needed. I had to be careful that I didn't dismiss my discomfort completely, and part of keeping things positive was alerting my team to my state of mind so they could be extra alert if I needed them to.

Positive thinking and conversations were not just a mere pat on the back. If morale and communication failed, mistakes, injuries, and bad decisions were bound to happen.

Turns out that positive conversations aren't always necessarily "happy" conversations, and negative conversations are detrimental to any team anywhere. Including the office. If you're noticing a high turnover rate, low morale, or team members suffering serious health problems you might want to check the frequency of positive interactions.

Here's a few things to keep in mind when stress or problems arise, and why it's absolutely essential to lead with positive leadership strategies:

The Chemistry of Conversations

Positive conversations aren't just something nice--they're essential to the health and well-being of your team.

In a recent Harvard Business Review article written by Judith E. and Richard D. Glaser, research showed that the cortisol produced by negative conversations between managers and employees can remain in the body for up to 26 hours. Whereas, oxytocin produced by positive interactions is not nearly as long-lasting.

So the results of negative conversations reside in our bodies much longer than positive conversations. As a leader working to build a profitable business, you know that your most valuable asset is the people working with you day to day in the office. It's probably a good idea to frequently take a conversational intelligence test to gauge the oxytocin temperature of the office.

Researchers asked managers how often they engaged in several behaviors — some positive, and others negative — on a scale of 0 through 5, in which 0 was “never” and 5 was “always.” It's important that you ask yourself regularly how often you engage in the same behaviors:

It looks like managers self-reported having more positive interactions with their employees, but the negative conversations were still present and not far behind the positive conversations. Remember, cortisol stays in the body much longer than oxytocin.

The Gallup Business Insider reports that

A recent study by psychologist Barbara Fredrickson and mathematician Marcial Losada found that work teams with a positive-to-negative ratio greater than 3:1 were significantly more productive than work groups that did not reach this ratio. 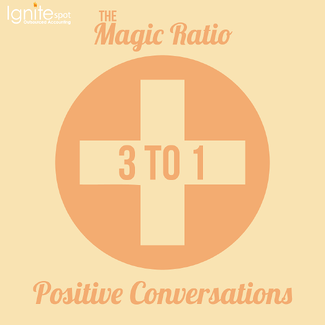 However, you might think that positive conversations cannot be overdone.

There's a magic ratio for overdoing it as well. The research showed that when the positive-to-negative ratio exceeds 13:1 "things are likely to worsen; completely blind optimism can be counterproductive--and downright annoying--in some cases."

This goes back to being honest and authentic. People can smell insincerity from miles away, and too much of a good thing can be just as destructive as too much negativity. You don't want to make people want to punch your teeth out every time you smile.

People are more emotionally intelligent than you might think. So work on that authenticity thing, alright? If you want a team united in creating a profitable company, ditch the Stuart Smalley approach.

Positive Is Not "Happy"

June Gruber, an assistant professor of psychology at Yale University studies the science of positive emotion. Her call for the moderation of positive emotions seems counter-intuitive when we are overwhelmed with articles, books, and programs to help us maximize our happiness.

Not so fast. Turns out that you can have too much of a good thing, and moderation really does win out.

Another thing to consider: positive emotions are more nuanced and complex than simply being happy. Positive conversations can include gratitude, inspiration, motivation, problem-solving, honesty, congratulations, acknowledgment for a job well done.

Bregman found that if he began the conversation with the punchline (honesty!) then people are more receptive and understanding of what you're saying. Bregman's advice here is priceless:

Next time you have a conversation you’re dreading, lead with the part you’re dreading. Get to the conclusion in the first sentence. Cringe fast and cringe early. It’s a simple move that few of us make consistently because it requires emotional courage. At least the first time.

But the more you do it, the easier and more natural it becomes. Being direct and upfront does not mean being callous or unnecessarily harsh. In fact, it’s the opposite; done with care, being direct is far more considerate.

Tell it like it is, and don't require people to cheer up and be happy. Research shows that the more we focus on happiness as a goal, the more likely we are to be depressed. And we all know that if your team is actually feeling depressed because your happiness expectations are too high, no one is going to be profitable.

The only way I got to the top of the Grand Teton was by keeping a "can-do" attitude while making sure that my communication was clear and optimistic. When dark storm clouds started to come our way my initial feeling was fear and dread. But the moment I opened my mouth to my team members that I was worried about the clouds we were able to have a productive conversation about our course of action. We were already too far to turn around so we simply had to pick up our pace to the summit.

At the summit, we quickly snapped a few pictures before heading down to where we would begin repelling. Those storm clouds were freaking me out, but I kept telling myself "keep moving," and the team kept talking. We had to know what everyone was feeling, and everyone had to keep a clear head.

As we made it down the first repel the storm clouds were miraculously swept away by a changing wind, and we descended the mountain safely.