History of the American Numismatic Society 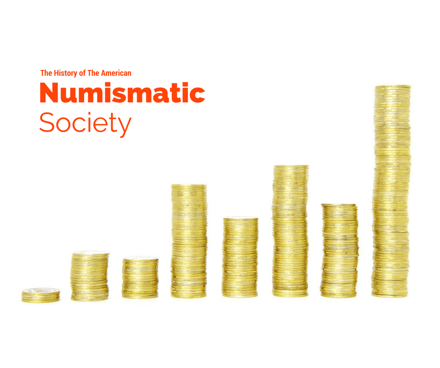 In March of 1858, a large group of avid coin collectors gathered together for a meeting in New York City. During the meeting, the coin enthusiasts, discussed the possibility of creating a society that would be dedicated to the study of coins. A short month later, the collectors had developed their society's constitution and bylaws. On April 6, 1858, the constitution and bylaws were approved and the American Numismatic Society was officially a recognized, learned society. The group of collectors that gathered for the original meeting in New York City were the founders and developers of this society. Edward Groh, Theophilus W. Lawrence, Dr. Isaac H. Gibbs, James Foskett, Ezra Hill, John Cooper Vail, W. H. Morgan, James Oliver, Henry Whitmore, Augustus B. Sage, Alfred Boughton, Asher Atkinson, M.D., Thomas Dunn English, M.D., LL.D., are all credited with acting as founders of the society. Each of these men not only founded the society, but remained active members by fulfilling roles in the society. The first official month that the American Numismatic Society became recognized, the founders and first members, received their first coin for study.

In the 1850's, the California Gold Rush had sparked the interest of the country. Countless people were in search of gold and many found it. With gold becoming more common in this period, the government began minting the country's very first gold coins. Along with minting gold coins, the Federal Coinage Reforms had been put into act. The Federal Coinage Reforms of 1850 consisted of creating currency with new sizes and designs. This sparked immense public interest at the time, as the country had not seen the development of a new size or design in coins in nearly fifty years. As the interest in coins and currency continued to grow following the Federal Coinage Reform and the California Gold Rush, so did the amount of donations that were made to the American Numismatic Society. The society began to become overwhelmed with the donations and studies, as they had no official space to store the coins or work in. This changed in 1908, as the president of the ANS in 1908, Archer M. Huntington, donated land and constructed an official building for the society. This immensely increased the interest and abilities of the group. By the end of the 20th century, under the leadership of Greek coin scholar Edward T. Newell, the ANS had gained over 100,000 unique coins, tokens, currency and books within their collection. This made the society an invaluable resource to those wishing to research these items, a group which included many students. The ANS was also responsible for setting the numismatic value of coins based upon research of this time period. The numismatic value was especially helpful for coin and currency collectors, as it gave them a price range for collectible coins that had once been an unknown factor. Such value is often referred to as "collectors value" as it bases price on matters such as rarity and condition. This helped to determine which coins were amongst the most valuable US coins.

Over the years, the ANS has increased their efforts to inform others about the history of numismatics. Beginning in 1952, the society focused on informing other scholars and collectors about the history of currency and coins and created many seminars for numismatics. The ANS quickly became the the most well-known, non-profit organization for numismatic research and all non-profit numismatic publications. In recent years, the ANS has expanded beyond scholars and collectors and now offers a large variety of programs that are open to the public. Public conferences, lectures and presentations are often made to other organizations to continue to spread the knowledge of coin history. The ANS often makes presentations to schools, coin collector clubs and even libraries to continue to invoke the interest of the public. The society continues to expand, perform research and is home to some of the most valuable US coins in history.

The American Numismatic Society has made a huge impact on modern day society. They have essentially taught the world about history through coins and currency. The society has become an invaluable resource for anyone that wishes to learn about coins or currency. The ANS remains the largest publisher of numismatic resources assisting in continued historical research within organizations, as well as continuing their own. By giving presentations at schools and libraries, the American Numismatic Society will continue to influence the general public to become involved in learning about the history of our country's currency.

Below are links to the best information on the American Numismatic Society, numismatic value and the most valuable US coins: